I live in Idaho near Sun Valley Resort, where my husband and I ski all winter with our two children. On my first of many trips to Grand Targhee ski area, the white-out conditions common to the area disoriented me. Fearful of unknown terrain, I increased my vigilance to know where I was on the trails at all times.

Death in the Tetons: Eddie “Cola” Fitzgerald’s Last 24 Hours, by Susan Tatarsky, recounts the story of a man who didn’t maintain such awareness, with tragic results. From the book description: 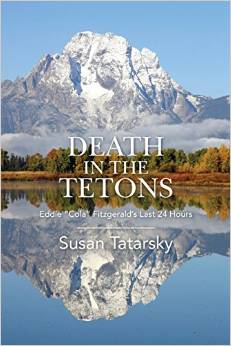 The Teton Range, located in the Rocky Mountains, is prone to sudden whiteout conditions that can disorient skiers enough that they lose their way. To help prevent this, ski resorts have clearly labeled trails, and the region boasts two separate Search and Rescue organizations plus the Grand Targhee Ski Patrol.

None of these helped Eddie “Cola” Fitzgerald in the last hours of his life. ….

Based on the true story of Eddie Fitzgerald’s death, Death in the Tetons is a retelling that includes facts and actual legal depositions by those involved—all of which reveal the tragic sequence of events that robbed a man of his life.

In August 2010, my local paper published news of the wrongful death lawsuit filed by the Fitzgerald family against Search and Rescue, et. al. I wondered then if the plaintiff understood the dangers of the large snowfalls Targhee receives, or if they comprehended the vastness of the surrounding rugged terrain. Throughout Death in the Tetons, many passages indicate that winter dangers in the Rockies are not fully understood by the plaintiff or the author.

The preface states, “Interest [in Eddie’s death] has been broad, but until now the specifics of the incident have been purely speculation, innuendo and personal opinion.” Unfortunately, this book is more of the same.

Emphasized throughout, allegedly the 911 dispatcher didn’t give to Search and Rescue (SAR) the full account of Eddie Fitzgerald’s description of his surroundings: in a meadow with downed trees near a stream. “This description only applied to one area near Targhee and that would have been the South Leigh Canyon,” states the introduction. The assertion that this description fits only one area is debatable. Regardless, the topographical map of the area shows several miles between Grand Targhee and the mouth of this canyon. In similar canyons, one would expect to find many meadows containing downed trees near a stream. The book repeatedly insists that rescuers “would have known immediately where [Eddie] was” (p 116) had they possessed his full description. This sounds unlikely. South Leigh Canyon presents acres and acres of terrain in which to search for a lost person.

Around midnight, searchers found ski tracks heading down a steep chute into South Leigh Canyon. Keeping SAR volunteers alive holds a higher priority than finding a lost person. Avalanche danger persuaded searchers to suspend the search until daylight. Over and over again, like an advertising campaign, Death in the Tetons employs dialog to question why the search isn’t continued from below along the valley floor. The preface states: “I have taken the liberty of creating additional dialogue and thoughts of the persons involved.” While some parts of the narrative are substantiated with deposition material from the lawsuit, none of the many statements advocating a valley floor search are supported with any evidence.

There are many good reasons to suspend a SAR operation during the night. Death in the Tetons doesn’t mention any of them. An avalanche can be triggered from below a slope just as easily as from above. Being at the bottom of a slope of unstable snow is a more dangerous place to be. It is much easier to find a person by following their snow tracks than approaching far away from their last known position, as a search from the entrance to South Leigh Canyon would have entailed. Continuing the search from the valley floor at night in risky avalanche conditions holds little merit.

The book insinuates that the head of the Wyoming Search and Rescue purposely suspended the search until morning so that a helicopter could be used, thereby increasing support for a helicopter fund-raising campaign. The book claims that he “wouldn’t have admitted it even to himself, but he was hoping the lost skier would not be found that night and they would be able to use the helicopter” because “every rescue accomplished via helicopter would further validate not only the fund drive for the new facility, but also the leasing and flight time fees paid by the county…” (p 121) This accusation imputes a wretched motive without a shred of evidence.

There is no bibliography, no index. There are some quotes from the depositions, unevenly interspersed. They must be a fragment of the whole if “[t]housands of pages of depositions were taken” as the preface claims. This book did not convince me of its accusations. If you’re looking for an impartial, thoroughly researched, and well documented book about the tragedy of Eddie “Cola” Fitzgerald’s death, this isn’t it.