Mrs. John Knightley was a pretty, elegant little woman, of gentle, quiet manners, and a disposition remarkably amiable and affectionate; wrapt up in her family; a devoted wife, a doating mother, and so tenderly attached to her father and sister that, but for these higher ties, a warmer love might have seemed impossible. She could never see a fault in any of them. She was not a woman of strong understanding or any quickness; ….

Mr. John Knightley was a tall, gentleman-like, and very clever man; rising in his profession, domestic, and respectable in his private character; but with reserved manners which prevented his being generally pleasing; and capable of being sometimes out of humour. He was not an ill-tempered man, not so often unreasonably cross as to deserve such a reproach; but his temper was not his great perfection; and, indeed, with such a worshipping wife, it was hardly possible that any natural defects in it should not be increased. The extreme sweetness of her temper must hurt his. He had all the clearness and quickness of mind which she wanted, and he could sometimes act an ungracious, or say a severe thing. He was not a great favourite with his fair sister-in-law.

John Knightley’s tendency to “sometimes act an ungracious, or say a severe thing” leads to some humorous scenes in Emma. He’s one of my favorite minor characters in literature. And I wondered, what would happen if Isabella (Mrs. John Knightley) died and John Knightley remarried a woman who wasn’t as sweet?

After years of letting that thought lie mouldering in the back of my mind, I took the NaNoWriMo plunge last November and got to work typing my ideas into dead pixels–as opposed to scribbling them down on dead trees. A new-found Twitter friend even designed me a working cover: 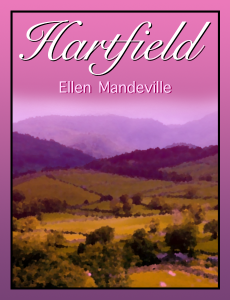 So far, Isabella has died in childbirth and John has remarried Isabella’s good friend, Sophia Weston–niece of Mr. and Mrs. Weston. I am also attempting to incorporate all the other marriages–5 in total–which took place in Emma. My current research includes reading Jane Austen’s Anglicanism, A Practical View of Christianity,  and The Book of Common Prayer, 1662. Which tell’s you that there’s a lot more to it than what I’ve outlined here, but John Knightley remarrying and an investigation of the married state are my original reasons for writing Hartfield.