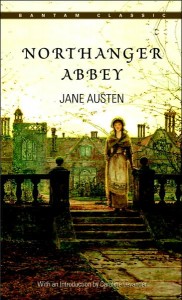 “…and if a rainy morning deprived them of other enjoyments, they were still resolute in meeting in defiance of wet and dirt, and shut themselves up, to read novels together. Yes, novels; for I will not adopt that ungenerous and impolitic custom so common with novel–writers, of degrading by their contemptuous censure the very performances, to the number of which they are themselves adding — joining with their greatest enemies in bestowing the harshest epithets on such works, and scarcely ever permitting them to be read by their own heroine, who, if she accidentally take up a novel, is sure to turn over its insipid pages with disgust. Alas! If the heroine of one novel be not patronized by the heroine of another, from whom can she expect protection and regard? I cannot approve of it. Let us leave it to the reviewers to abuse such effusions of fancy at their leisure, and over every new novel to talk in threadbare strains of the trash with which the press now groans. Let us not desert one another; we are an injured body. Although our productions have afforded more extensive and unaffected pleasure than those of any other literary corporation in the world, no species of composition has been so much decried. From pride, ignorance, or fashion, our foes are almost as many as our readers. And while the abilities of the nine–hundredth abridger of the History of England, or of the man who collects and publishes in a volume some dozen lines of Milton, Pope, and Prior, with a paper from the Spectator, and a chapter from Sterne, are eulogized by a thousand pens — there seems almost a general wish of decrying the capacity and undervaluing the labour of the novelist, and of slighting the performances which have only genius, wit, and taste to recommend them. “I am no novel–reader — I seldom look into novels — Do not imagine that I often read novels — It is really very well for a novel.” Such is the common cant. “And what are you reading, Miss — ?” “Oh! It is only a novel!” replies the young lady, while she lays down her book with affected indifference, or momentary shame. “It is only Cecilia, or Camilla, or Belinda”; or, in short, only some work in which the greatest powers of the mind are displayed, in which the most thorough knowledge of human nature, the happiest delineation of its varieties, the liveliest effusions of wit and humour, are conveyed to the world in the best–chosen language.”