Hannah More enjoyed a brilliant literary career among the London literati in the late 1700’s, was an equal among William Wilberforce’s cohorts in ending the British slave trade, and brought to fruition what the Protestant Reformation boldly stated in theory: 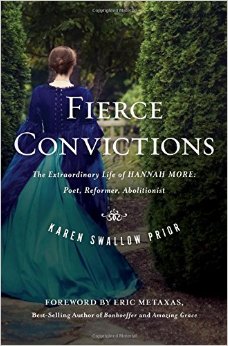 in order to understand the Scriptures, all should learn to read. So why is it that her poems, essays, pamphlets, and fiction as well as her pioneering work in education are little known today? In part it is due to her immediate friends; in part it is due to her subsequent enemies, states Karen Swallow Prior in her biography Fierce Convictions: the Extraordinary Life of Hannah More—Poet, Reformer, Abolitionist.

Hannah More’s close friend and first biographer, William Roberts, “flattened the rich textures of her personality and faith. Robert’s emendation of her letters and records re-created More in a saint’s image.” (p 252) A few generations later, the modernist movement “defined themselves principally by their rejection of the values that most defined the Victorian age: duty, family, piety. More’s reputation was irreparably tarnished when Augustine Birrell … proclaimed in a 1905 essay that he had planted his nineteen-volume set of her collected works in his garden.” (p 252) With the dismissal of the Victorian age as a whole, Hannah More, the “first Victorian,” was consigned to the dusty annals of history and forgotten. “Somewhere between Birrell’s hatred and Robers’s hagiography is a woman who was at one ordinary and remarkable,” Dr. Prior states. (p 253) In Fierce Convictions, Dr. Prior re-introduces Hannah More to a world which owes her much.

From the back cover of the advanced reader copy:

“MEET THE WOMAN WHO HELPED END THE SLAVE TRADE, CHANGED BRITAIN’S UPPER CLASSES, AND TAUGHT A NATION HOW TO READ.”

Rather than following a linear narrative of More’s life, the book is arranged in topical chapters. Beginning with her childhood and complicated family history, other chapters highlight the significant aspects of More’s life: singleness in spite of offers of marriage, her early literary career, and her involvement in the Bluestocking Circle. The next few chapters delineate More’s growing disenchantment with fashionable London life and turning more fully to her Christian faith. Rather than employ her literary skills to create dramas upon the stage, More turned her attention to the horrific dramas taking place in life itself: slavery, illiteracy and vice, animal torture, and revolutionary agitation. She then put her literary and interpersonal skills to work in realizing their solutions: abolition, creating schools to teach reading and morality, putting an end to animal blood sports, striving for reform to combat causes inflaming talk of revolution, and finally the writing of fiction to redeem it from mere titillating entertainment into more edifying reading matter.

Dr. Prior’s summation of the slave trade which fueled Britain’s economy moved this reader to tears. The work of More and the “Clapham Circle” was far more than supporting William Wilberforce’s work in the House of Parliament; More’s literary skills were vital to the success of the long and tiring campaign. “… More and her cobelligerents—her partners in this great war—were sustained in their long efforts not only by religious faith but also by the vitality of a moral imagination.” (p 121) “…it could be said that More was the mastermind behind some of the abolitionist movement’s most effective campaigns to sway public opinion. Imaginative literature, such as More’s anti slavery writings, and other arts were essential to the abolitionist movement because, as has been noted, the slave trade was so hidden from the eyes of the people. … [M]oral imagination filled in where rationalism stopped short.” (pp 133-134) Just as Hannah More’s literary work illuminated the horrors of slavery to an unknowing British public, Dr. Prior’s book unearths More’s work out from the annals of history where it has been buried away for too long. Thankfully, Dr. Prior did not need to dig it up from Birrell’s garden.

One might not think that teaching children to read would involve horrific drama. However, “the schools were controversial from the start. The idea of educating the class of people who were born to labor, as most believed, was a radical idea.” (p 141) While the first foreign missionary outreach by British were just beginning with William Carey, More discovered that “there were similarities between faraway lands and the villages close at hand, particularly in their spiritual and intellectual states.” (p 142) Many villages in Britain were abandoned by the Church: “neglect by the state-assigned clergy was rampant. Collecting tithes while neglecting their parishes was all too common among rectors.” (p 144) And there was more than simple ignorance in these villages: “In one village, the laboring men were so feared that ‘no constable would venture to arrest’ one, ‘lest he should be concealed in one of their pits, and never heard of more.’ The sisters[, Hannah and her sister Patty,] were warned not to even enter the village, ‘lest our persons should be endangered.’” (p 144, Quotes: Hannah More, Mendip Annals, pp 28, 67) Far from being an easy task, establishing schools to teach children, and then their parents, to read was an arduous, labor intensive undertaking with much opposition from various sources. The obstacles weren’t only the villagers themselves, but also the farmers who ruled them, the clergy who ignored them, and other factions of society who feared upsetting the social-order apple cart. Dr. Prior displays how More put her faith into action:

The belief in the centrality of Scripture to the essence of Christianity and the incumbent necessity of teaching people to read had been at the heart of the Protestant Reformation. Centuries later, More was getting the task accomplished.
(p 160)

Striving for animal welfare may seem to be an unexpected inclusion in the activities of More and the rest of the “Clapham Circle” with whom she worked. Until one reads of the horrific animal blood sports which engrossed many at the time, that is. “Witnesses to one organized fight described how dogs were tortured in order to goad them into fighting…” (p 189) “… such cruelty was not limited to the ignorant poor.” (p 190) More and her cohorts recognized cruelty to animals as antithetical to a Christian worldview, and that it denigrated more than the animals involved. “Opposition of blood sports was not always rooted solely in concern for the animals. Rather, some began to recognize the way such activities affected the human participants. Wanton cruelty to animals dehumanized it participants and, in turn, hampered ‘enlightened morality’ and intellectual progress.” (p 192) Far from being a simple plea to take care of pets and livestock, working to prevent animal cruelty by More and her associates was also a call to becoming more human and humane. Dr. Prior’s writing manages to engage the reader even while depicting disturbing subject matter.

These are only a few of the topics covered in Fierce Convictions. Throughout, Karen Swallow Prior depicts how Hannah More’s convictions formed, matured, and goaded her into action. Prior contrasts More’s convictions with other prevailing world views of the day such as the Cult of Sentimentality and conservative utilitarianism. The chapters being arranged topically rather than as a linear narrative, necessitates moving forward and back in the time-line of More’s life. This choice of organization can cause some confusion, but Prior is meticulous with dates throughout and the careful reader will be able to follow the layering effect of the topical approach. There is much to be gained in reading Fierce Convictions: the depiction of a brilliant woman who used her talents for the good of others, an unflinching look into important history poorly known to many, and the demonstration of what can be accomplished by well-organized like-minded people. Karen Swallow Prior masterfully summarizes and presents the beautiful, complex life of Hannah More. Brava, Dr. Prior!

[I was given an advanced reader copy in exchange for an honest review of Fierce Convictions.]